It's been so long since I've written a large amount. Notes here and there, some line edits and maybe a scene on a good day. My life has been in upheaval for far too long. Plans are my safety zone. I'm planning to participate in JuNoWriMo. A spin-off of the beloved NaNoWriMo. I'm in the mood for writing so I don't want to wait until November to give myself a kick in the butt.

Do I expect to write 50,000 words in June? If I answer that honestly, I'll just be setting myself up for failure. Writing is something I value, so I will do my utmost to make time to write. The hope/goal is for the habits I establish in June to carry over permanently.

One week (of overtime of work, of course!) before JuNoWriMo. I'm excited! Not so much about the fact that June 1st is a Monday and I have to work. But excited about the since of community that comes from joining in word sprints, encouraging each other along and sharing your characters surprise you.

One thing I will be working on this week is flushing out some background on my characters. I won't force it, but my MC doesn't even have a name. I just call her 'she' and put MC in parenthesis when there is pronoun confusion.
Posted by Meg at 5:00 AM 1 comment:

My Writer's Mind Scared Me Today

Usually, it surprises me. Or makes me cry. But today, my writer's mind scared the crap out of me. I feel like I'm in a Stephen King novel! I never thought I'd be writing any kind of horror or thriller, but that's what this one is turning out to be.

So what did I write? Not sharing that! I've learned over the years that sharing samples usually leads to regret because in a week, a month, or a year I'll think it is such utter crap I'll be ashamed I ever posted it. If I ever publish anything, then samples are likely. Until then, process discussion only!

As I've said, I have some mental illnesses. One perk is that I get outlandish thoughts that very easily turn into story ideas. One had to do with a mauling, another with a bank robbery. Then there was the galaxy outlaw portraits hanging in the prime minister of the solar system's dining room.

Not scary sounding, I know. But there are some scary bits, I promise!

I just finished typing up all these little notes I've jotted down (in my phone or in the notebook by my bed) over the last few months. Now it's time to flush out some characters and solidify some basic plots.

Been a while since I've seen you, darling reader. My life has been quite the roller coaster in the last...gosh! A year and a half. My posts on my WordPress site disappeared on me..so huge gap in posts! I don't think I really posted much in that time frame anyways.

So, what happened? My mind went on an adventure, leaving me practically house bound. You all know from previous posts I have been diagnosed with OCD. I went to my doctor last June because my intrusive thoughts were bad. I could leave the house to go to work and that was basically it. Toby would try to get me to go with him walking the dog, it was like pulling teeth, without novocaine, to step out the door.

Off to the doctor I went, finally. I passed the clinical depression test (sounds much better than failed the happiness test!) and was put on an anti-depressant. Then swapped to another one because I was tired all the time. Then she added an anti psychotic because the intrusive thoughts just kept getting worse. Then, the biggest drop in the roller coaster, I wanted to kill myself.

Thankfully, I told Toby, and he got me to tell my doctor. Since I was not literally about to kill myself, she put me into a partial hospitalization program (PHP), instead of recommending an impatient program. It helped. It was two weeks of intensive classes and psychotherapy. A new diagnosis was added as well. I have Bipolar Disorder, Type 2.

After that, I went through a 10 week class (once a week) called ACT, Acceptance and Commitment Therapy. I just finished it last week. Such a revelation! It taught me to think about my conditions and my thoughts in a completely different way. (Info on ACT here, if you're interested.)

Throughout all this I have managed to keep writing in spurts. I've started a rewrite of my novel Ivory. My writing ability has grown since I first sat down to write this novel during NaNoWriMo in 2007. One thing I've learned is that all these thoughts I have, no matter how horrible they seem, I can live with them. The interesting ones I write down now. I've gotten some great outlines since I started doing this.

While my mind and I have been at odds for the last year and half (okay, longer but who's counting?), I feel that I'm nearing a peace treaty with it. We're definitely in talks, no assassination attempts in a while. There's hope I will learn to live with my mind, rather than trying to destroy it.

Had my fun with wordpress...back to blogger for me! Too many options on wordpress, I'm a simple girl when it comes to website options and techie stuff.

I will be copying the posts from my other site onto here over the next few weeks (when I have time!) But for now, enjoy some photos of my Shiba Inu Louie! 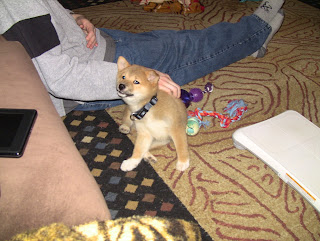 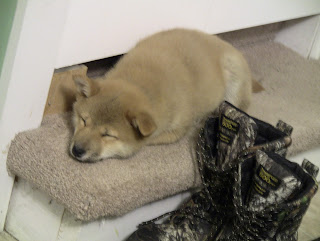 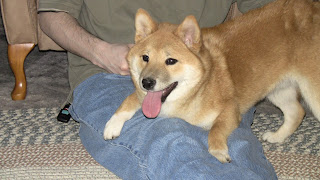 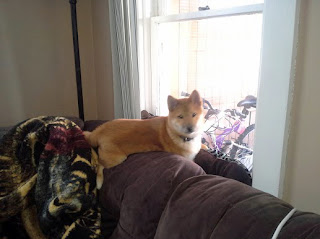 (I just finished watching 'The Great Escape," feeling dramatic at the moment!)

Welcome! If you see a pink up there ^, then you're at my new site! I decided to make the switch after tons of positive WordPress feedback form various sources, and the fact that a way to move my followers was found. :)

If you still see orange up there ^, click HERE. Please follow me again, or bookmark me, or however you want to kept updated.

Midterms started last Monday, so I completely spaced the whole blog thing for the week. Oops!

NaNo started yesterday! I hit my goal of 2k! Ended with 2028. Shooting for another 2k today. After homwork. I really want that 3.5 GPA this semester.

I am! I have a very loose outline. I am not comfortable with that. I want a tight outline, but I still can't figure out the middle.

I will have one mid-term after NaNoWriMo starts - sucky. At least it's not till the 5th.

Sadly, I have class the morning of the 1st, so staying up late and starting at midnight is not in the cards for me. I am so writing while in class. I swear, my professor repeats everything he says on Monday, on Wednesday. If it weren't for attendance rules...

I woke up this morning and swore it was only Wednesday. This week went by crazy fast.

As for my possible switch to WordPress - I got excited. We found a way to move my followers. Then the server started having issues.

Went down for maybe an hour the other day, having issues right now. I'm not switching until they get it figured out. I don't want to send you to a slow and crashing website!

Probably why I'm so frazzled!

And we have a minor emergency here, Zeus ran out of chewies! The world is ending! So I am off on an emergency store run, and I'm praying he doesn't chew anything up while I'm gone. He hasn't been left home alone without a chewie in a long time. Last time he chewed up something. My husband's xbox headset I think. And some paper.

Meg
I'm a generally optimistic person, happy with life in general. Fledgling writer, covering all genres so far it seems. I haven't found my 'home' yet.